Putting my “flexible timetable” at HP to the test, I told my manager that I would be taking most of the week off last week to pursue a new and creative project. My manager responded with, “OK. You can do what you want.” I love my new job 🙂

About six months ago, one of the dubbing studios I work at called me and asked if I’d be interested in heading a new animated series that they had just signed the contract for. Never one to turn down a challenge (or a chance to work on a cartoon), I accepted. The show is called “Little King Macius” – or, in the original French, “Le Petit Roi Macius”. 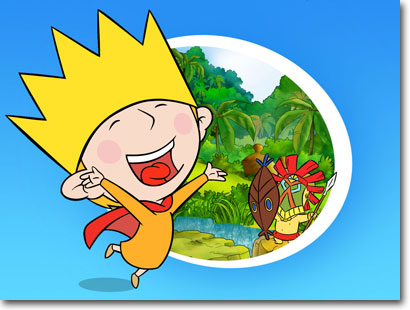 Apparently based on a true historical figure, “Little King Macius” is about a little orphan boy who is king of an island nation. Intended for 5 to 8 year olds, the charming show has Macius and his little friends going on adventures and learning valuable life lessons while foiling the evil plans of Macius’ military general who will stop at nothing to steal the crown for himself.

The French animation studio that owns/created Macius had already created an entire first season of episodes using voices from a studio in England. The series was dubbed into a bunch of different languages and sold all over the world. It’s apparently very popular in Poland! Now, for one reason or another, the client was looking to switch recording studios and consequently find all new actors. A studio here in Barcelona won the contract and that’s where I come in. After agreeing to head the project, we started with nothing but the scripts for what was to be the next 26 episodes. I recorded all of the voices of all of the character for all 26 episodes over the course of one week. It was great fun! I got to create the characters and their speech patterns and there wasn’t any animation to inhibit my creativity. Once all the reference audio was recorded, the studio was able to start animating the episodes using my voice as a guide.

While they were busy animating, I invited a bunch of my actor friends to the recording studio to audition for the different characters. Of course they had to try and match the voices that were used in the first season as best as they could. I sent the clients three different options for each character and they made the final casting decision. They even chose me for one of the smaller parts! But since I’m also directing the series (meaning, I’m the boss), I’m bound to voice the majority of the incidental characters – like the sailor shouting from the boat as the kids run past or the old man who warns them of the haunted castle. I much prefer using four or five different voices in every episode for smaller characters than using the same voice for one main character. It gives me a chance to constantly invent new characters and find new voices for them.

So last week we started dubbing the first four episodes. I went into the studio every morning to record with a different actor and then I took the train to HP every afternoon. It was a very busy week! We’ll probably receive a new set of four episodes every few weeks until April. I think the series has already been sold to over 20 countries so look for it on a children’s cable network near you!