I hope everyone enjoyed their 2007 and rang in 2008 in style. I know I did. In fact, I spent this New Year’s Eve doing exactly what I had been hoping to do: attempting to take over the world!

Never being one for loud dance halls, unruly house parties, or freezing cold sloppy street celebrations, my perfect New Year’s Eve was realized when Jan and I invited Ed and Basia over to our place for a quiet evening of laughing children, creative cocktails, fine dining, and the 2008 Risk World Championship. It was heaven.

Natalie and Emily started the festivities by bouncing around the house and filling the night air with delightful laughter. They got on like a house on fire! We all thought that Natalie, thanks in part to her watching over Emily like a little sister, seemed much more like an 8 year old than the 3 year old she really is. They soon tired themselves out and were swiftly put to bed, allowing the adults to break open the liquor cabinet. 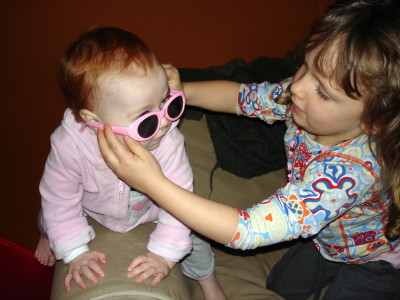 With the help of an old friend, I mixed up some killer concoctions while we all snarfed down the obligatory olive cocktail mix, Pringles, and fuet while Jan prepared her patented Seafood Ragu. In a spur of the moment decision, Jan declared rum to be her official drink for 2008 so I whipped up some wicked Bahama Mamas to set the mood. We ravenously made short work of Jan’s delicious dinner even though Basia initially balked at the standard Zamrycki portions. I swiftly moved our guests on to Mudslides (thanks, Phil), while I poured myself a Terry.

We had just enough time to set up the Risk board and review the rules for the uninitiated before midnight drew near enough that we hurriedly doled out the grapes and poured the champagne. Please don’t tell any Catalan friends that we opted out of the Cava this year. I don’t think they’d understand that I had a bottle of Piper-Heidsieck lying around and it was too good to pass up. Anyway, we downed the grapes with every stroke of the midnight hour and washed them down while watching a typical Spanish New Year’s TV celebration (sexist, vacant, and generally trying too hard). The TV went off and the soldiers occupied their territories.

This was easily the high point for me of the entire evening. I have been massively addicted to Risk recently and I was getting tired of playing by myself against the computer. I needed a worthy competitor. I was happy to see Basia doing some quality trash talking so I knew there would be some decent competition. I captured all of South America from the very beginning and quietly laughed at my pathetic opponents as my position only got better from there. A stubborn Alaska was all that stood between me and North America when, out of nowhere, Jan declared her missions completed and everyone’s jaws hit the floor. I felt utterly cheated but I shook her hand anyway and we all crowned her the 2008 Risk World Champion. Grrr.

Ed went in to our bedroom to check on Natalie and we never saw him again. Jan brought her laptop and a few episodes of Seinfeld into the guest room and crashed. Basia and I trolled YouTube for a little while, but we, too, were no match for the dopiness brought on by good food and alcohol. We all went to bed and slept soundly through the first night of the new year. Except for Emily who woke up quite often. And Jan who tended to her. And Natalie who was woken by Emily.